So it's been almost a week since TMC13 ended.  It comes and goes so quickly, but it's impact will stay with me for a long while. While writing this I wanted to mention that although I loved TMC13, it was just missing something for me since @fouss and @druinok were not there. 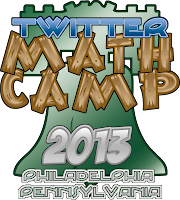 Even though my grey hair tells you I've been teaching for a hundred years, the fact is I am only entering year four.  In fact, I was probably one of the oldest people at TMC13, but have less experience than most people there.  My experience is mainly in the non-teaching world.  This experience serves me well in general, but I will always feel that I have a lot to learn.

Even though in my business career I was responsible for tens of millions of dollars and managed dozens of people, there will always be twinge of inadequacy in me when I am in a teaching environment.

Teaching makes me feel younger than I am because of the nature of what it takes to be a teacher and that I am mostly around younger people.  After 15+ years in the stuffy marketing/advertising world, I am more energized for life in general now more than ever.  One of my favorite parts of teaching is that I get to re-boot each year.  In my previous career, any frustrations I had tended to fester and build.  Maybe this is why in that industry people generally turn over and switch companies or roles frequently.

As a teacher, we can work hard in year x, succeed some and fail some, but in x+1 start over with some extra knowledge we didn't have before.  This for me is heaven.  I get to keep trying to fix what I know is wrong.  It's like using a pencil with eraser in your career.

Anyway, one thing that has stayed consistent for me is my tweeps.  My first two tweeps that I tweeted with frequently were  @fouss and @jreulbach.  The people that had been helping me survive from a distance are always there for me (and I for them) year after year.  That list has grown in a big way.

Last year when the prospect of a Math Teacher cruise cropped up, I was excited!  To be honest, I felt much better when the cruise idea died and the idea for math camp in St. Louis took priority.  In fact I even remember @fouss and others trying to see who was interested.

I really felt a connection with those peeps.  To be honest, I don't think I could have made it through my first couple of years without them.  Even if I didn't actually know them or even follow them, there was something about what we shared that swept me up.  Bottom line, that crew @fouss,  @jreulbach,  @druinok, @lmhenry9 and the rest of TMC12 swept me off my professional feet.

TMC13 was equally awesome personally and professionally although I think the vibe was slightly different.  I suppose there will be growing pains for "la cosine nostra".  I use that term as a joke. I kind of feel like I am part of the Math teacher mafia now, La Cosine Nostra!  Growing up on Staten Island and now living in New Jersey, both homes to "La Cosa Nostra", translated "this thing of ours"....the mafia.

Statistics in the Morning
Although I am mainly an Algebra 1 teacher, I wanted to spend my morning sessions with the stats group.  I am much less comfortable teaching stats than algebra so was in desperate need of arms to fall into.  I'm pretty sure @approx_normal could catch me if I fell.  Hedge, your stats presentation was my single favorite session of the whole event!

@maxmathforum you simply rock!  Your session will remain one of my favorites.  You are a good person and a great thinker and teacher.  Thank you for "notice" and "wonder"! Now I do more than ever before.  Also it was wonderful that your colleagues from Drexel helped us get around.  The facility was amazing and the people were wonderful.  Please tell those folks thanks again (and good luck to the undergrads).

@gwaddellnvhs (Glenn), you are a great roommate and great mentor.  Your knowledge of statistics is mindblowing!

-I need a break here.  I can't believe I even rambled this much!  I  still have a lot more to write.  Wanted to post this for now...will add more later.  :-)

Email ThisBlogThis!Share to TwitterShare to FacebookShare to Pinterest
Labels: TMC