Cone of Silence (Think Get Smart!)

CONE OF SILENCE (Think Get Smart! TV show from the 60's)

I got the idea for this week's M4MM from a Twitter conversation I had with @druinok and @LaurenDeReche about setting up desks in our rooms.

@druinok has her desks set up in groups of four like this.  @LaurenDeRoche had referenced a blog post she saw here which basically is the same set up that @druinok has.

So I was sold.  Here are the way I will set up my desks: 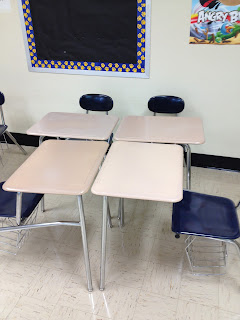 But, I really hate giving my lovelies an even better opportunity to cheat...so how can I stop it?  Well, I could rearrange desk for assessments or put up folders to block their vision across desks.  That simply doesn't work for me.

I need to make this as complicated as possible for myself, so I decided to make vision blockers out of PVC pipe.  @druinok's response was

She was referring to my M4MM from last week.

I thought and realized there has to be an easier way!  A way that appears complicated and out of the box, but is simple and inexpensive.

On a trip to Costco later in the day I found the answer!  Here is the solution I came up with in action... 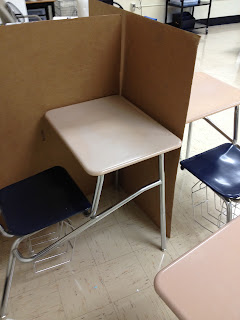 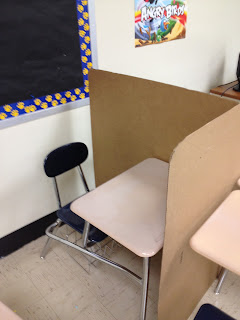 That's right! Those flat cardboard pieces are perfectly sized to create cubicles in my room!  Almost as if they knew I was coming! Do the folks at Costco follow us on Twitter?  Maybe!

So I call this contraption the "cone of silence" named after one of my favorite shows from when I was a kid and played hookie!

Maybe I could have the kids paint scenery of sunshine and blue skies or a quiet pond with fluffy clouds to keep them in a good mood during tests?

Here's another possibly better solution posted by Amy Gruen.  I like her idea because it seems very easy to execute.  I am off to Pizza Hut today!  I was considering cutting my cardboard pieces to fit on top of the desks, but this idea is just so perfect!  Thanks Amy! 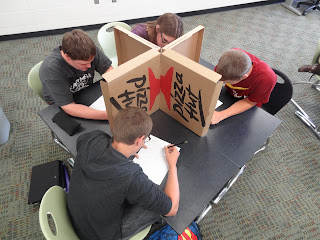